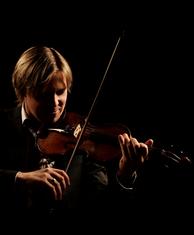 Swedish-born violinist Erik Heide graduated from the Royal Danish Academy of Music in Copenhagen in 1998 after studies with Milan Vitek. Further studies followed at the Musikhochschule in Cologne with the Alban Berg quartet and in Helsinki with Ralf Gothoni.

Erik is one of Scandinaivas most acclaimed and prizewinning chamber musicians and has together with his pianotrio, Trio Ondine won the Haydn Competition Vienna, the Parkhouse Award London, audience price in both ARD competition Munchen and Melbourne International Chamber Music Competiton. The pianotrio has performed in concerthalls such as: Wigmore Hall, Concerthaus Wien, Pablo Casals Festival. They have also been New Generation Artists for the BBC.

Erik has performed as soloist with many orchestras and recorded several violinconcertos for the Danish Label Dacapo. The latest one together with Lars Anders Tomter and Norrköping Symphony Orchestra was nominated for an American Grammy and was Editors Choice in the Grammophone.

Erik was 1 concertmaster in Copenhagen Phil between 2004-2018 and in the Stavanger Symphony Orchestra between 2017-2020. He is still 1st concertmaster in the Danish National Chamber Orchestra and performs regularly as guest leader with orchestras across Europe. He has been invited to guestlead Orchestras such as, Madrid National Symphony Orchestra, Gulbenkian Orchestra Lisbon, Hamburg Staatsoper, Oslo Opera, Norwegian Radio Orchestra, Oslo Phil among others.

Erik is a very dedicated teacher and has in recent years established himself as an exciting, innovative and energetic teacher in Scandinavia. Erik will during the coming years work together with YOMA ( Young musicians Academy in Sweden ) where he will teach the most talented violinists in Sweden and around Europe between the age of 13-18.